What Goes Best With a Hot Dog?

"What goes best with a HOT DOG? Right...Beer or ale the way you like it...in those easy-to-open CAP-SEALED CANS!"

In the summer of 1940, a war was going on somewhere in Europe, and there was talk of some mad man taking over countries and slaughtering millions. But far away in the heartland of America, the main concern was rolling out those lazy, hazy, crazy days of summer. Those days of soda and pretzels and especially beer. And Continental Can Company wanted to convince people that their Cap-Sealed (cone top) beer can fit best with summertime activity. 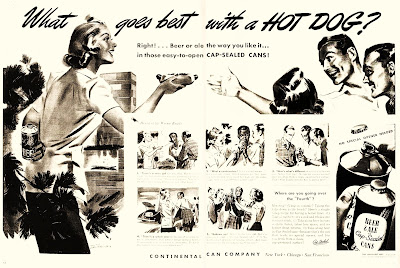 The year before, six and a half million of the 30 million cases of canned beer sold had been consumed in July and August alone. With a recovering economy, all indications were that 1940 would be the biggest season yet, and the brewing and beer can industries were gearing up to meet the expected demand. For Continental and the 83 breweries using cone tops, it was a matter of convincing consumers that theirs was the superior package.

Continental embarked on an aggressive print advertising campaign, paid for through a cooperative arrangement with those brewers and beer distributors using their Cap-Sealed cans. Lively two-page spreads ran in popular magazines such as Life, Collier's and Liberty, featuring people having fun and discovering for themselves the advantages of the Cap-Sealed can.

There were nine spreads in all, pointing out the convenience of taking the can along for picnics, outings, cook-outs, parties and other occasions, stressing that no special opener was needed, unlike other types of beer cans that required a "church-key" opener ("opens just like a bottle"). You could drink from a "clean, cap-protected surface," and there were no empties to return. No environmental regulations, either.Once you consumed the contents, you could simply throw the can into the outhouse pit, sink it in the lake, toss it into the campfire or add it to a pile somewhere, where excited collectors could find it decades later. One of the ads depicted a young man, with his sweetheart, letting his empty float away in a stream. 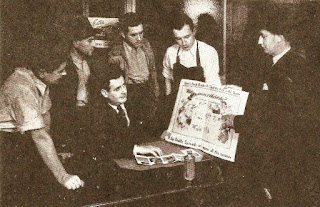 Continental put a considerable amount of market research into the campaign. They sent their men out to beer distributors and beer drinkers across the country to get their views on the package and how to market it. When asked, 2,032 distributors said they preferred the Cap-Sealed can to the flat top can. Only 102 chose the flat top, and 232 had no opinion. With flat tops, distributors had to handle the special openers, thus making the cone top more desirable. In addition, in nearly every survey taken, two out of three beer drinkers said they preferred the cone top.

The distributors and brewers were enthusiastic about the summer ad campaign and the local sales promotion that was given to them in their own territories, and they told Continental that the combination helped build package sales and volume. 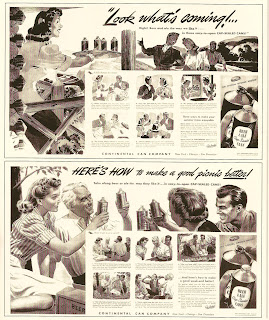 The campaign paid off handsomely. In the first eight months of 1940, the distributors were reporting sales overwhelmingly ahead of those in all of 1939. The year 1941 also saw banner sales (until the U. S. entrance in the war put canned beer on hold). After the war, the Cap-Sealed can was eventually phased out, ending up being regulated mostly to automotive additives, and even those eventually went to plastic bottles. You can't buy anything in cone tops anymore, unfortunately.

But imagine for just one moment that it's the summer of 1940 once again. A beautiful day, kind of humid, but there's a nice breeze. The women are setting out food and talking, the men are playing a friendly game of baseball, the children are running abound. You get yourself an ice-cold cone-top can of beer, grab the opener and pry off the cap. Shhhhlock. A little bit of foam rises. You bring the metal surface to your lips and swallow down the wonderful liquid refreshment. Ahhh!.

Meanwhile, a war rages on in the rest of the world.
Posted by Jeff R. Lonto at 11:44 AM