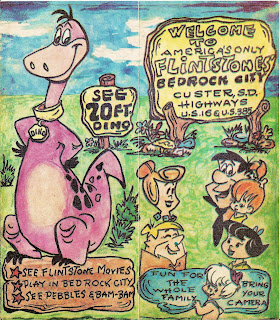 You've seen them on TV and in comic books. Now -- visit the Flintstones in their own Bedrock City at Custer, South Dakota, on highways U.S. 16 and 385.

You'll see Fred and Wilma - Barney and Betty and, of course, Pebbles and Bamm-Bamm. Visit the firehouse, the Bedrock bank, city jail, oodles of stores and The Bedrock Theatre, where you'll enjoy Flintstone films showing continuously. Dino is twenty feet high, perched on one of the many rocky ledges that add to the fabulous beauty of the sixty acres that comprise Bedrock City and camping area. Modern bath houses and rest rooms add to the comfort of campers and travelers and a drive-in and souvenir shop add to the enchantment of Bedrock. The cool dry nights and balmy days assure you a delightful vacation in the heart of the beautiful Black Hills, just a short distance from Mt. Rushmore and the buffalo herds. Remember!! There is only one Bedrock City in America!

Soon there would be another Bedrock City, in Arizona, plus two in Canada, making a total of four Bedrock City theme parks in North America. All of them are gone now, victims of changing times, licensing issues and new generations of kids disinterested in such schmaltz. 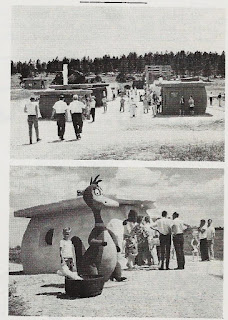 I never did make it out to Flintstones Bedrock City. It's a shame too. The original Flintstones-themed park in Custer, South Dakota was in a state that bordered my home state of Minnesota. But when my family went on a trip, at least when I was in tow, we either went up north or out to Wisconsin. Never west. Come to think of it, I never saw nearby Mount Rushmore in person either.

Being enamored with Fred and Barney from age five on, I'm sure I would have enjoyed it as a kid, and would have still gotten a kick out of seeing it as an adult. I heard about it when I was a kid. I knew some kids who had been there, some telling me it was pretty neat, others saying it wasn't all that good and I wasn't missing anything. Certainly it was no Disneyland. It was a roadside attraction, not a destination. It had cement "Stone Age" buildings and cement statues of Flintstones characters that weren't exactly to Hanna-Barbera's specs. Postcards feature employees posing in character costumes that look rather hideous, or shall we say, primitive. 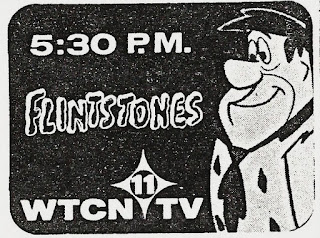 The first Bedrock City park in Custer, SD opened in 1966, the year the Flintstones left prime time network television after six seasons. But the show became even more popular in syndicated reruns, usually running in late weekday afternoons to the delight of millions of children coming home from school. Myself included. In my home town of Minneapolis, for a time in the early 1970s, it was shown twice a day by independent station WTCN-TV Channel 11, mornings and afternoons, plus two back-to-back episodes on Sunday mornings. I wanted to hang out with Fred and Barney, and be their pal. In a way, I was kind of able to do that when I watched the show. But if I had been able to go to the Bedrock City theme park, I'd be able to walk into their homes, stroll down their main street and ride in their cars. I could have acquired inexpensive Flintstones merchandise at the souvenir shop, and I could have enjoyed the local cuisine, Bronto Burgers and Dino Dogs. Truly a three dimensional version of a one dimensional cartoon.

Here's a few postcards from the park in South Dakota, circa 1969. 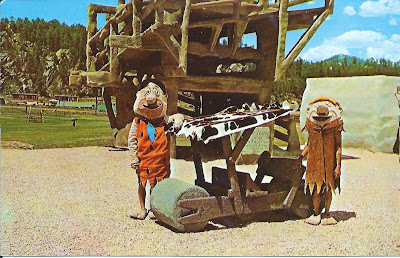 "In front of a skyscraper under construction stand Barney and Fred waiting for their families to take a ride in their sports job (sic). They stand on the main street of Bedrock City, Custer, South Dakota." 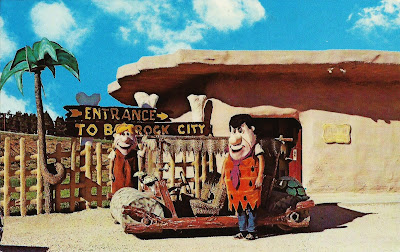 "Stopping in front of the Souvenir Shop, Fred and Barney chat awhile before leaving for work." 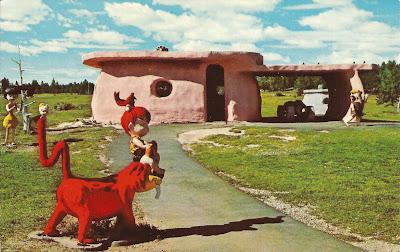 
A second Flintstones park opened in Arizona in 1972. It was smaller, but some say it was better. Two more eventually popped up in Canada, but they were fairly short lived. Over time, the parks were updated, but not too much. The twenty-foot Dino statue at the South Dakota park was repainted in different colors over the years. The cement character statues were replaced with fiberglass ones that were more to specifications, at the demand of the current owners of the Flintstones intellectual properties of the time.  The franchise had changed corporate hands a number of times over the years, eventually ending up under the auspices of Warner Bros, originator of the Looney Tunes cartoons.

The Flintstones continued to be seen in perpetual reruns on local stations, including WGN in Chicago and its vast cable network, well into the 1990s. Eventually, the show would become an exclusive of Turner Broadcasting's Cartoon Network, later being shuffled over to the Boomerang channel, which is seen on far fewer cable and satellite outlets. As this happened, the Flintstones began to fade from the public consciousness. Recent generations of kids have little clue and no curiosity about the Flintstones. There are still Fruity and Cocoa Pebbles cereals featuring Fred and Barney on the box, and Flintstones Vitamins remain the best-selling children's chewable, but that has more to do with the buying decisions of the parents than the demand of the kids, as had been the case when those products came out decades ago.

The Bedrock City parks in South Dakota and Arizona finally closed in 2015, and perhaps it's amazing they lasted that long. People lost interest, kids no longer care, and the current owner of the Flintstones intellectual properties, Warner Bros, had no interest in renewing the licenses to use the characters. The Stepford Children of today don't give a damn about such things. Same reason why Toys R Us and most other toy stores went out of business. If it's not an app they are completely lost and clueless. They're not even kids anymore, they are mutants.

An interesting and in depth history of the Flintstones theme parks can be found here:  https://www.theawl.com/2016/03/amidst-of-the-rubble-of-bedrock-city/
Posted by Jeff R. Lonto at 7:34 AM