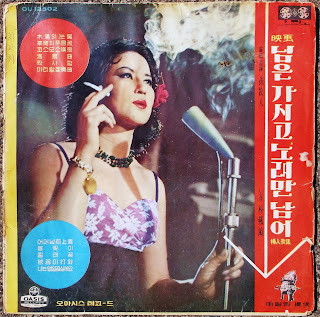 I found this unusual foreign gem in the $2 bin at a record collectors' show in Minneapolis a few years ago, and had to snatch it up, even though I couldn't read a word on it except for "Oasis Records," "Seoul, South Korea," "High Fidelity," "Side 1," and "Side 2." Fine print on the back cover also references RCA and "Telefunken U-47," a type of microphone that Frank Zappa referenced on one of his records with sexual innuendo. ("You'll love it.")
On the front cover, a color photo of an attractive young Asian woman singer looking rather Westernized, wearing a halter top, bracelet and necklace with a flower in her hair above her left ear, a lit cigarette in her right hand, while standing at a microphone caressed by her left hand. A cloud of exhaled tobacco smoke hovers over her. That in itself seemed unusual, as I have heard that South Korean culture is quite conservative, and even now, women who smoke publicly are looked down on. The Oasis Records logo appears in the lower left corner, and a Shin Films logo in the lower right, suggesting it might be a movie soundtrack.

Listening to the record, the style was kind of early 1960s nightclub Asian jazz-pop, full orchestration, with kind of torch singer vocals, sung in Korean, sounding sweet and melodic. Not really a throaty smoker's voice. 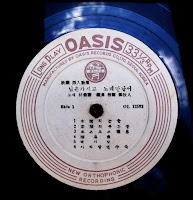 After posting an image of the album cover on Flickr, someone commented, tipping me off that the singer's name is Jaeran Park (or Park Jae-ran), and the album title translated into "My Darling Has Passed Away, but His Song Still Remains." Upon further research, I found that she was born in 1938, and that this album came out in 1964, so she would have been about 26 years old at the time. She is actually well known in South Korea, putting out albums from the late 1950s until at least the early 1980s, and making numerous appearances on Korean television, some of which can be found on YouTube. The musical genre is called "K-Pop" in the trade, or Korean Popular. Apparently she also did some acting, which might help explain the Shin Pictures logo (wonder if the cover picture is from a movie). She looks a lot more conservative/traditional in most of the other images I have been able to find of her. The label, Oasis Records, in now an EMI subsidiary.

The other mystery would be, how did this copy end up in the United States, and ultimately in a $2 bin at a record collectors' show in Minneapolis?