On July 25, 1967, television viewers with black-and-white TV sets were startled to see flashes of color on their monochrome screens for about ten seconds during a 60-second soda-pop commercial. A letter to a columnist in the September 14, 1967 Detroit Free Press asked, "Before I see an eye doctor, let me ask Action Line: Is it possible to pick up color TV on a black and white set? I SWEAR I saw a Squirt soft-drink commercial in color. Not pink elephants Green Squirt!" The image was described in the newspaper column as a red, green and blue sign that had flashed on the screen.

A viewer in Chicago told Popular Photography magazine (July 1968), "I saw pink! It knocked me for a loop...the letters S-Q-U-I-R-T looked greenish or light turquoise...and it kept up for maybe 10 seconds." (Meanwhile a viewer in San Francisco claimed he didn't see anything colorful.) 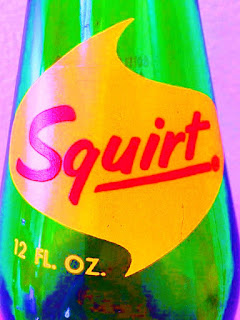 It was the national debut of an experimental television commercial using a special production process that would give the optical illusion of color. The commercial first aired a few months earlier locally on KNXT, the CBS-owned television station in Los Angeles, and viewers there were just as stunned. Squirt and its advertising partner Color-Tel Corporation of Los Angeles, at the time decided to make no prior announcement of this experimental commercial, preferring to see just how viewers would respond. And respond they did. Within hours, thousands of viewers were asking if they really saw what they thought they did, color on their black-and-white TV screens, according to Popular Electronics magazine (October 1968).

The burst of color was not "living color" (as NBC frequently touted in the 1960s), but something called "subjective color." The process was developed by James F. Butterfield of Color-Tel, a corporation founded in Los Angeles in early 1966. It gave the illusion of color by pulsating white light in a particular sequence for each color with a rotating device attached to a regular black and white TV camera lens. Butterfield had found in his many years of research that the human brain perceives colors through complex electronic codes. Butterfield was able to figure out the individual codes for the colors red, green and blue, and by pulsating white light in predetermined patterns with the device on the camera lens, could induce the brain of the television viewer to perceive color. Beyond that, ordinary monochrome equipment could be used in filming or taping, broadcasting and viewing.

There were a few drawbacks. The images were nothing at all like true color TV. It didn't have the intensity or range of colors. As the technology currently stood, the effect could only be used on still images. The "subjective color" could only be seen in about one-fourth of the TV screen area, and, because it relied on flickering light, there was a lot of flickering. It was also found that some people could not perceive the colors at all, yet some people diagnosed as color-blind could see the colors.

Nonetheless, Popular Science, in its August 1968 issue, saw many possibilities for the technology, particularly for special effects. "Color will appear in cartoons, commercials and special presentations. Polka-dots on a clown's suit will be seen as red flashing dots. You'll see the designs and lettering on a cereal box in pulsating green and blue. A girl will plant a kiss on a boy's cheek--and a red lipstick print will appear on your screen."

Popular Electronics (October 1968) went on to report, "Right now, Color-Tel engineers are checking into the possibility of using electronic color for such things as color radar displays, color computer readouts, and perhaps even color sonar pictures. It may be true that, in its present stage of development, Butterfield's process is nothing but a scientific curiosity — however, 25 years ago, so was television."

Popular Science predicted, "You can expect color on your black-and-white TV by this fall [1968]." But there was one giant flaw in that rosy prediction. By 1968, black-and-white TV was well on the way out. The vast majority of programming (outside of old movies and TV shows) were being broadcast in "living" color by then, and while most U.S. households still had black-and-white TV sets (color sets were big, bulky and expensive in those days), more and more homes were purchasing color television sets every year. Had James F. Butterfield perfected the process ten or fifteen years earlier, in the 1950s when 90 percent of television broadcasts were black and white, it might have had more of a serious impact.

Although James F. Butterfield had many patents to his credit before his death in 2013, it appears this experiment didn't go as far as the press of the time might have suggested it could. Color-Tel last renewed as a corporation in 1972, and we can not find any evidence of other "subjective color" broadcasts beyond the Squirt commercial. 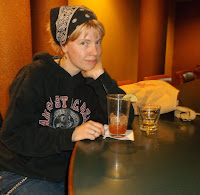 Terror Alert: 1970 offers a well-articulated introduction into a time many of us could not (or can not) grasp understanding of. It's one of those micro topics you might only briefly cover if you take a history class on the 1960s, as I did in college. One immediately makes comparisons to the nature of today's terror attacks vs. the year 1970 upon reading. And as far as Minnesota goes, well, personally I never heard of a string of such bombings! How is it that I missed that about my own home state's history?

The text transitions very nicely from introducing a specific terror threat at a Twins baseball game and linking it with one of the many summers of unrest due to the Vietnam war protests. But are such unexplained bombings linked to Vietnam? Further reading seems to prove confusion of the motives.

When you think of today's terrorists, you think of an outside enemy with fundamentally different ideals invoking fear and disrupting the daily lives of western citizens. We know who they are and why they want to harm our society. But in the case of domestic terrorists, no one seemed to know who or why. What were they hoping to accomplish? 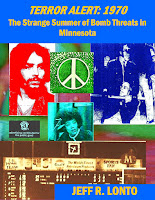 Also puzzling is why certain companies were targeted that had nothing to do with what was happening in the news about war overseas. With an astonishing 400 bomb threats made in just part of the year, how did the public react? Today, we would think of the many violent gun crimes and hear people rally to do something to stop criminals from getting them. But what do you do about bombs? You certainly can't ban something someone will make at home and use to cause serious damage. That isn't rational.

I think these events happening in the year 1970 tells us something. That there was an alarming shift in our culture. It wasn't the nice, complacent 1950s anymore. Any sense of peace and unity seemed scarce with the ever growing “new left” political atmosphere at the end of the 1960s decade. What it comes down to is, who is to blame for these events? Individual actions? Or outside events that drove them to it? In the end, you, the reader must decide for yourself.
Posted by Jeff R. Lonto at 9:10 PM No comments: