The Rise and Fall of the 40 ft. Inflatable Hamm's Bear--a photo essay

On July 9, 2016 in Cloquet, MN, a town just outside of Duluth, the historic Northeastern Hotel and Saloon hosted a brewery collectibles show called the Nordlager Show, named after an old local brew. Hotel and Saloon owner Bert Whittington took out of storage a massive inflatable Hamm's Bear, manufactured around 1980 for the Olympia Brewing Company, the makers of Hamm's beer at the time. Connected to two electric-powered air compressors, the huge vinyl blob lying on the ground came to life, and the familiar cartoon character Hamm's Bear stood tall and proud, greeting passersby for a triumphant but brief moment...until he started to lose air. 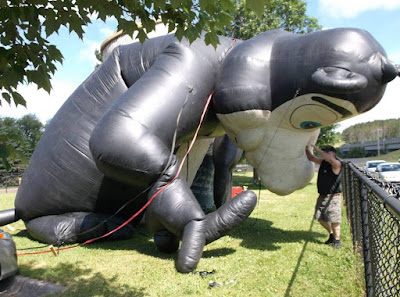 1. He came to life from a big blob of vinyl on the ground. Owner Bert Whittington helps him up as he fills with air. 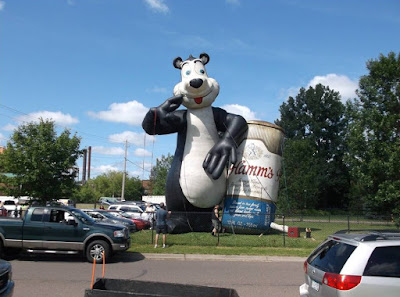 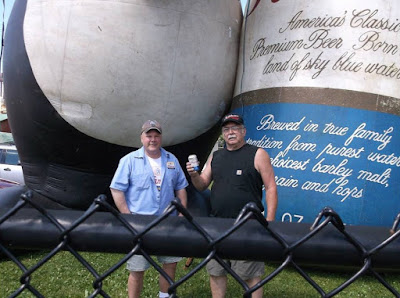 3. Pete and Bert celebrate with a cool, refreshing Hamm's beer.
Note how much smaller the real can (in Bert's hand) is. 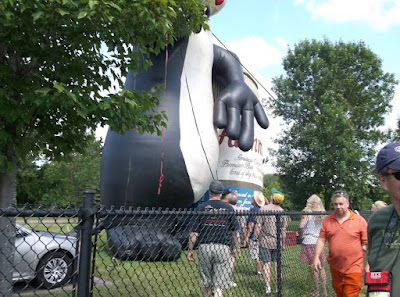 4. People came from all over to look at the thing. 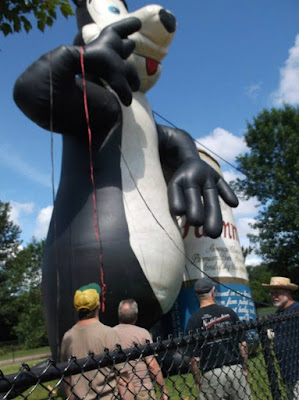 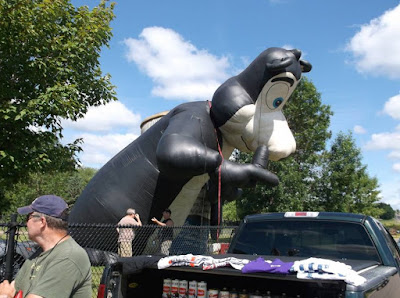 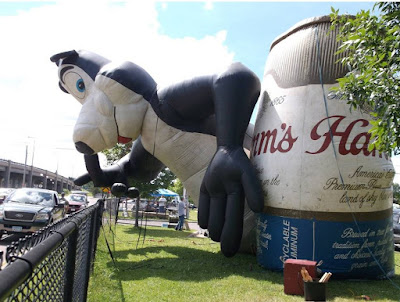 7. Looking like he's about to hurl after consuming the contents of the giant beer can. 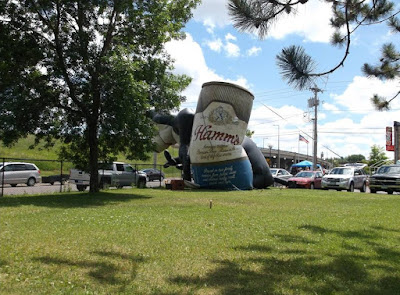 8. Another view of the sick, deflating bear, the beer can looking dented and forelorn. 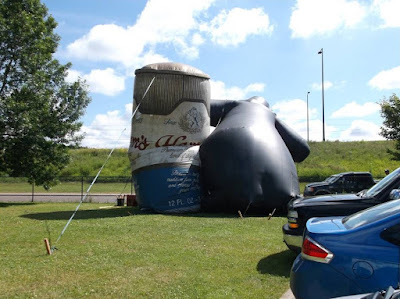 The summer of 1970 was a pretty intense time in my home turf of Minneapolis-St. Paul, Minnesota, the Twin Cities. After a spring filled with anti-Vietnam War protests and student strikes that were for the most part fairly low-key compared to other places, the late summer and early fall brought on a whole slew of bomb threats on pretty much a daily basis and lasting for months, that had people perplexed, uptight and at the same time bemused. This is the topic of my new e-book, "Terror Alert:1970, the Strange Summer of Bomb Threats in Minnesota," available for $2.99 on Smashwords.com. http://www.smashwords.com/books/view/647955

On August 17, 1970, a dynamite blast in the overnight hours at a downtown Minneapolis federal building, where a Selective Service office among other things was located, caused an estimated $500,000 worth of damage, hurled chunks of granite weighing up to 300 pounds into the street and injured a nighttime security guard, the building's only occupant. Five days later, a two-pound stick of dynamite exploded in a wastebasket in the women's rest room at the St. Paul Dayton's department store, seriously injuring one woman. A second, much larger bomb with a timing device was found in a nearby location in the store, and was, thankfully, defused. 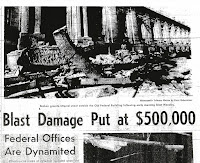 Then over the next several weeks, residents, area businesses and the police were kept on their toes with phoned-in bomb threats on a daily basis, forcing many evacuations. In some instances, bombs were found, but more often, the threats turned out to be false alarms. One such threat forced the evacuation of a Minnesota Twins baseball game at Metropolitan Stadium on August 25, 1970. About 3,000 of the nearly 17,700 fans actually went out on to the field, against the wishes of law enforcement and team officials, and mingled with the players. Beer and hot dog vendors followed them out there and did brisk business. No bomb was found and the game resumed after a 45 minute delay. It was obviously an entirely different world then.

A couple days later, a woman was quoted in the Minneapolis Star newspaper, "Imagine. Come to Minneapolis and live dangerously. Who would have thought it?"

The bomb scares continued in the Twin Cities. Area hotels, TV stations, and all kinds of businesses had to deal with bomb threats. Actual bombs were found, and quickly removed, from two Minneapolis restaurants. And a young man was literally blown to bits while carrying plastic explosives during a late night thunderstorm and was apparently struck by lightning, damaging a home and a car, but killing only himself in the process. The big mystery was, why was this happening? There was a lot of speculation, but no clear answers.

My e-book "Terror Alert:1970" documents the incidents and events based on newspaper accounts from the time without speculating myself or throwing in any contemporary political commentary. Take a look. A 20% free sample is available at Smashwords.com, and it can be downloaded to any device, including your desktop computer.
http://www.smashwords.com/books/view/647955