Storz-ette "The Original Beer for Women" 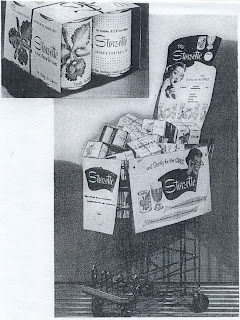 In the early 1950s, the Storz Brewing Company of Omaha, Nebraska, which had been brewing beer for much of the western United States since the late 19th Century, decided its biggest potential growth market was women. Women were traditionally not big beer drinkers, many saying that the swill was too bitter and too fattening, and Storz advertising and packaging was decidedly on the masculine side. Tobacco companies had successfully convinced women in droves to smoke cigarettes in the previous couple of decades, a habit once deemed as strictly a male pleasure, so why not get them into the beer-drinking habit with a brew marketed especially for them.

In 1953-54, Storz-ette was test marketed in San Diego, California. Looking at the way it was sold, one gets the impression that the whole thing was concocted by some male "mad men" making assumptions of what appealed to women with little input from actual women, except maybe passing comments from their wives.

Storz-ette was sold in just one type of package, 8-ounce "queen size" cans that were a little smaller than the standard 12-ounce beer can. The reason behind the smaller cans was because "women have felt standard sizes too large for a serving," according to a company representative quoted in the trade magazine Modern Packaging from December 1953.

These petite beer cans featured a pink orchid lithographed on the label and on the lid (which was a plain flat lid that had to be opened with a special punch-type opener, before the advent of the tab-top), a pattern of small orange dots over a clean-looking white background, the name "Storz-ette" in green script, and the slogan "The original beer for women." The beer also claimed to be "calorie controlled," although light beer as we know it today hadn't yet been invented, and that it was less bitter than regular beer, most likely achieved with more water and less hops. The overall can design was very fifties-fashionable. 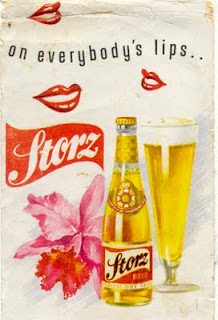 The 8-ounce "queen size" cans came in a 4-can "Princess Pak" paperboard carton that had a similar design plus a printed red ribbon going around it so it looked like a gift. The "Princess Paks" were jumble displayed in small shopping carts in stores, with attached full-color placards featuring gossipy-looking ladies saying "It's NEW and strictly for the GIRLS."

Storz also merchandised for women drinkers small packets of flat sheets of tissue that could be used to wipe off some of the layers of lipstick that fifties ladies wore so thickly, before they sank their lips into a beer glass (and left a disgusting greasy imprint that would be difficult to wash off).

Storz-ette proved to be a bomb and according to sources, the one San Diego-based Storz distributor that handled the product dumped the remaining stock into the ocean. The Storz Brewing Company would eventually merge with Minneapolis-based Grain Belt Breweries, Inc. in 1967, and the Omaha brewery would finally close for good in 1972.

Alex Bennett in the Sixties 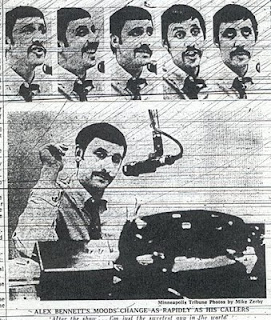 Alex Bennett, an icon of progressive music and talk radio for over four decades currently hosts a weekday talk show over Sirius Satellite Radio (Sirius Left 146) and XM Radio's America Left. Mixing left-wing politics with humor, he is something of a "Groucho Marxist" of talk radio.

He built a respectable, if often controversial broadcast career doing both talk and album rock formats in places such as New York, Miami and his native San Francisco through the years. And in talk radio he was a true pioneer, hosting political and current events-driven call-in shows in Houston and Minneapolis-St. Paul going back to the early days of the format in the 1960s.

A found article in the Minneapolis Tribune from January 29, 1968 profiled the then 28-year-old radio host, described as having a "lean and hungry look" with "extended sideburns and a walrus mustache," offering a glimpse into the early stages of his career and the early days of talk radio, which, contrary to popular belief, did not start with Rush Limbaugh in the late 1980s.

According to the 1968 profile, Alex Bennett began his radio career as a top-40 disc jockey but decided to become a talk man "when he realized he was going off his turntable playing rock 'n' roll for teenyboppers." He started out doing talk radio at KILT in Houston, Texas, moving on to WLOL-AM in St. Paul, Minnesota in late 1967. On his Houston show, "I had John Scopes on, the monkey trial guy. We found him in Shreveport, Louisiana. What a wonderful guy. He's over 60 now and still a rebel," he told the Minneapolis Tribune.

"Then I had Tim Leary on to discuss LSD. He's one of the few people I just couldn't argue with. I don't agree with him, but he's an absolutely charming guy."

He also claimed that while doing talk radio in Houston, he conducted a seance on the air, and that he was frequently threatened both on air and off. When an on-air caller threatened to punch him in the nose, Bennett told him, "I'll tell you what, you come down here at ten tomorrow night and we'll go off in a corner and let another announcer give a blow-by-blow description."

The man who made the threat didn't show up "but 500 other guys came down to the station all claiming to be the guy who called," Bennett told the Tribune.

In Minneapolis, working at the legendary WLOL Radio, Bennett found callers to be a little less volatile. "I've been on the air [here] six weeks now," he said in January 1968, "and there haven't been any bomb threats or people following me or dirty phone calls."

But it wasn't all "Minnesota Nice." He said that Twin Cities callers were better educated and at the same time more racially prejudiced than those who called in to his Houston show. "The level of our conversations is higher here, but we also get more hate callers. In the South they still have segregation as an outlet for their hatred of Negroes, but here their hates have been suppressed because segregation isn't the socially accepted behavior."

Bennett acknowledged that even back then, "A majority of callers on any talk show are conservative." His own views, as he described them at the time, were more moderate liberal than radical Left. "I am basically against the war in Vietnam and I suppose you could call me a pacifist...As a nation which has led others to improvements in standard of living and human rights, it's about time we set the pace for peace."

Houston and Minneapolis were mere stepping stones for a man destined for the big markets. In 1969 he went to WMCA in New York City as it transitioned from top-40 to talk. While there, among other things, he went to London to investigate the Paul McCartney death rumors (and would later become a close friend to John Lennon and Yoko Ono). But his stated views were becoming more radical, at least for the station and its sponsors.

In a May 1971 follow-up, the Minneapolis Tribune reported, via the trade paper Variety, "Bennett, one of the early noisemakers and boat rockers in 'LOL's talky format, was fired recently from his reported $35,000-a-year nightly show on WMCA...supposedly for his 'anti-establishment preachments' in favor of legal marijuana and in disfavor of President Nixon and associates.

"One sponsor, Coca-Cola, which reportedly had told its agencies to avoid such 'controversial' shows as 'All In The Family,' the Smothers Brothers and 'Laugh-In,' dropped out of Bennett's show after one on-air program with the Yippie party, Variety related."


But Alex Bennett was quickly snatched up by another New York station, WPLJ, and he later moved on to his native San Francisco, Miami, and back to San Francisco, doing both talk and album rock.


If anyone thought his career would be over after getting fired from WMCA, a career that has lasted over forty years has proved them wrong. He may not be as well known as some of the conservatives of talk radio, but he's been around a hell of a lot longer.