With recent talk about nations expanding nuclear capabilities and a renewed arms race, we take a look at a booklet issued by the Federal Civil Defense Administration, issued in 1957 and directed at average Americans, called "Facts About Fallout."

Going back to 1945 with the end of the Second World War via the atomic bomb, there was always a looming threat that another nation with more sinister intent might turn the tables back on the United States.

The Soviet Union, although a U.S. ally during the war, soon figured out how to make its own atomic bomb, threatening the and democracies around the world, thus triggering what came to be known as the Cold War. With the Soviet threat, and troops battling communists in in the early 1950s, there was serious worry that the Cold War could turn red hot and that cities could be the target of nuclear attack by the . With the lives of millions of civilians at risk, legislation creating the Federal Civil Defense Administration was signed by President Harry S. Truman and enacted on January 12, 1951.

The government wanted Americans, who had lived through two world wars without ever seeing a direct attack on the homeland, to know that this threat was damn serious. Air and missile bases would be likely targets of an atomic bomb, as would major cities. The blast, heat and radiation would kill millions of Americans at or near ground zero of such an attack. Millions more would be injured or killed by radioactive dust — fallout — kicked up by the blast and blown to all parts of the land by wind, so no one was safe. A plan needed to be put in place, and a citizenry needed to be informed on how to handle such a dire situation.


Through the Civil Defense Administration, regional offices were set up, civil defense directors were appointed in communities across the land, informational booklets and posters were published, films were produced, and civil defense experts appeared on radio and television programs, to let John Q. Public, his wife and his children know how serious the threat was and what they can do to protect themselves. 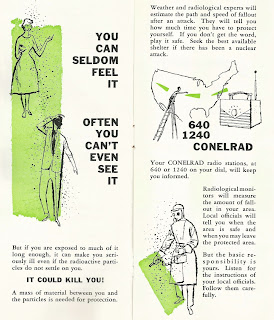 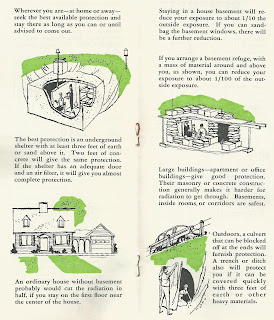 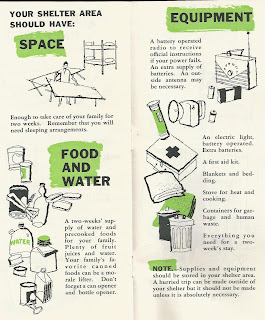 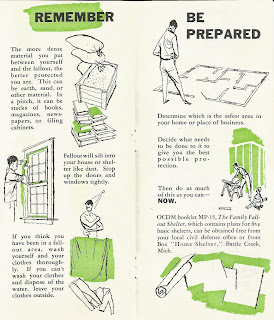 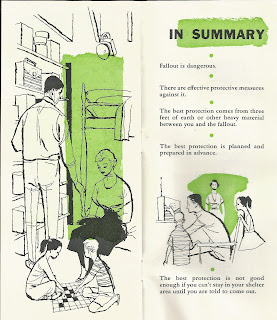