In the 1940s, two of the most popular, and powerful entertainers in the country were Gene Autry and Arthur Godfrey, although the two men seemed to have little in common.

Gene Autry was best known as the ultra clean-cut singing cowboy whose primary fan base was pre-teen boys. Working for Republic Pictures, a studio renowned for B westerns, he was not the kind of cowboy who moseyed into saloons, knocked back shots of whiskey, rolled smokes, brawled and shot bad guys dead. Instead, he was the kind of cowboy who rode around on his horse, strumming his guitar, singing prairie songs. He worked hard, warned bad guys to go straight, rescued those in dire predicaments and engaged in such wholesome activities as singing around the campfire with friends or joining in barn dances. His philosophy as an entertainer was, “Make it clean, make it simple, and remember the little feller.”


In addition to the eight motion pictures he made a year for Republic, he was also big on the rodeo circuit and he had a popular radio program, which followed a similar format to his movies. The radio show was sponsored by Wrigley’s Spearmint Gum, which he personally endorsed, a common advertising practice at the time. In real life, Gene Autry was almost as wholesome as his character. He was faithful to his wife, he didn’t smoke and he seldom drank. He admitted what he presented was corny and he was proud of it, as it made him millions.


Arthur Godfrey’s primary audience was adults who by the millions were enchanted with his folksy style on his talk-variety show on CBS Radio. At a time when radio was king and television was just coming out of the laboratory, Godfrey was one of the most listened-to and beloved men in America — although that popularity would tank later on as he became known for on-air firings, public feuds with other entertainers and overall arrogance.


Godfrey’s success before all that went down was said to be due to his (seemingly) honest personality and the spontaneity of his program. He proved to be a great asset to advertisers, who clamored to be on his show both for the exposure and his convincing delivery of their sales pitches.


He most famously advertised cigarettes at a time when tobacco advertising was both legal and common on the airwaves. When he touted the benefits of smoking and purred “They Satisfy” with his deep, smoke-cured voice, stores would sell out their supplies of within hours of his broadcast. 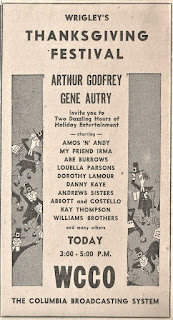 When Gene Autry and Arthur Godfrey teamed up for a star-studded Thanksgiving special CBS radio broadcast on , the combination of sponsor endorsements and spontaneity lead to a classic faux pas in the golden age of radio.


The singing cowboy and the folksy emcee bantered and played some songs together. Godfrey even threw in some plugs for Autry’s radio sponsor, Wrigley’s gum. Then it came time to plug his own sponsor.


“After today’s Thanksgiving dinner, it will be mighty nice to light up a . And then, to make it taste better, chew a stick of Wrigley’s,” Godfrey suggested. “Isn’t that right, Gene?”


Godfrey was taken back for a moment, but then retorted, “Happy Beechnut to you too!” as the audience laughed uproariously.


CBS, to their credit, did not edit the program when it was rebroadcast later for the Pacific and Mountain Time zones.


Sources:
“It Is Corn But They Ask For It” by Howard Sharpe, ,
“’s Man Godfrey,” by Jonathan Kilbourn, Look,
“Light Up, Chew Up, Tangle Up—Godfrey and Autry both snafu” Minneapolis Morning Tribune,