Fifty years ago, Mobil Oil Corporation ran a series of rather graphic, sharply-worded advocacy ads in newspapers about unsafe driving and young people, with the slogan, "We want you to live." Many decades before anyone conceived of the current problem of texting while driving. Nonetheless, the ads are very much worth taking another look at.

This one, titled "Fresh-killed chicken," featured a depiction of a deceased young man, face-down on the pavement, wearing a "Jets" jacket. It ran in the Minneapolis Star and other newspapers across the United States on October 10, 1966. 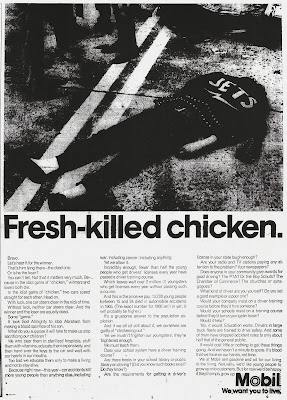 Let's hear it for the winner.

That's him lying there--the dead one.

Or is he the loser?

You can't tell. Not that it matters very much. Because in the in the idiot game of "chicken," two cars speed straight for each other. Head on.

It took God Almighty to stop Abraham from making a blood sacrifice on his son. What do you suppose it will take to make us stop sacrificing our children?

We who bear them in sterilized hospitals, stuff them with vitamins, educate them expensively, and then hand over the keys to the car and wait with our hearts in our mouths.

Too bad we educate them only to make a living and not to stay alive.

Because right now--this year--car accidents kill more young people than anything else. Including war. Including cancer. Including anything.

Yet we allow it.

Incredibly enough, fewer than half the young people who get drivers' licenses every year have passed a training course.

Which leaves well over 2 million (!) youngsters who get licenses every year without passing such a course.

And this is the price we pay: 13,200 young people between 15 and 24 died in automobile accidents in 1965. (The exact number for 1966 isn't in yet; it will probably be higher.) It's a gruesome answer to the population explosion. And if we all sit still about it, we ourselves are "chickening out."

Yet we mustn't frighten out youngsters; they're frightened enough. We must teach them.

Does your school system have a driver training course? Are there books in your school library or public library on driving? (did you know such books exist? Do they know?)

Are requirements for getting a driver's license in your state tough enough? Are your radio and TV stations paying any attention to the problem? Your newspapers?

Does anyone in your community give awards for good driving? The PTA? Or the Boy Scouts? The Chamber of Commerce? the churches or synagogues?

What kind of a driver are you yourself? Do you set a good example or a poor one?

Would your company insist on a driver training course before they'd hire someone?

Would your schools insist on a training course before they'd turn a youngster loose?

Yes it would. Education works. Drivers in large truck fleets are trained to drive safely. And some of them have dropped accident rates to only about half that of the general public.

It would cost little or nothing to get these things going. And we haven't a minute to spare. It's blood that we have on our hands, not time.

We at Mobil sell gasoline and oil for our living to the living. Naturally, we'd like young people to grow up into customers. But for now we'd be happy if they'd simply grow up.

Mobil. We want you to live.