When the Grinch First Stole Christmas

On Sunday, December 18, 1966, the Dr. Seuss TV special "How the Grinch Stole Christmas" was shown for the first time on the CBS Television Network. The Grinch was so mean, he preempted "Lassie," although young fans of the beloved collie probably didn't mind. The half-hour animated special has been shown every year since and has been seen by countless millions, most of whom at this point in time were born decades after its original broadcast. 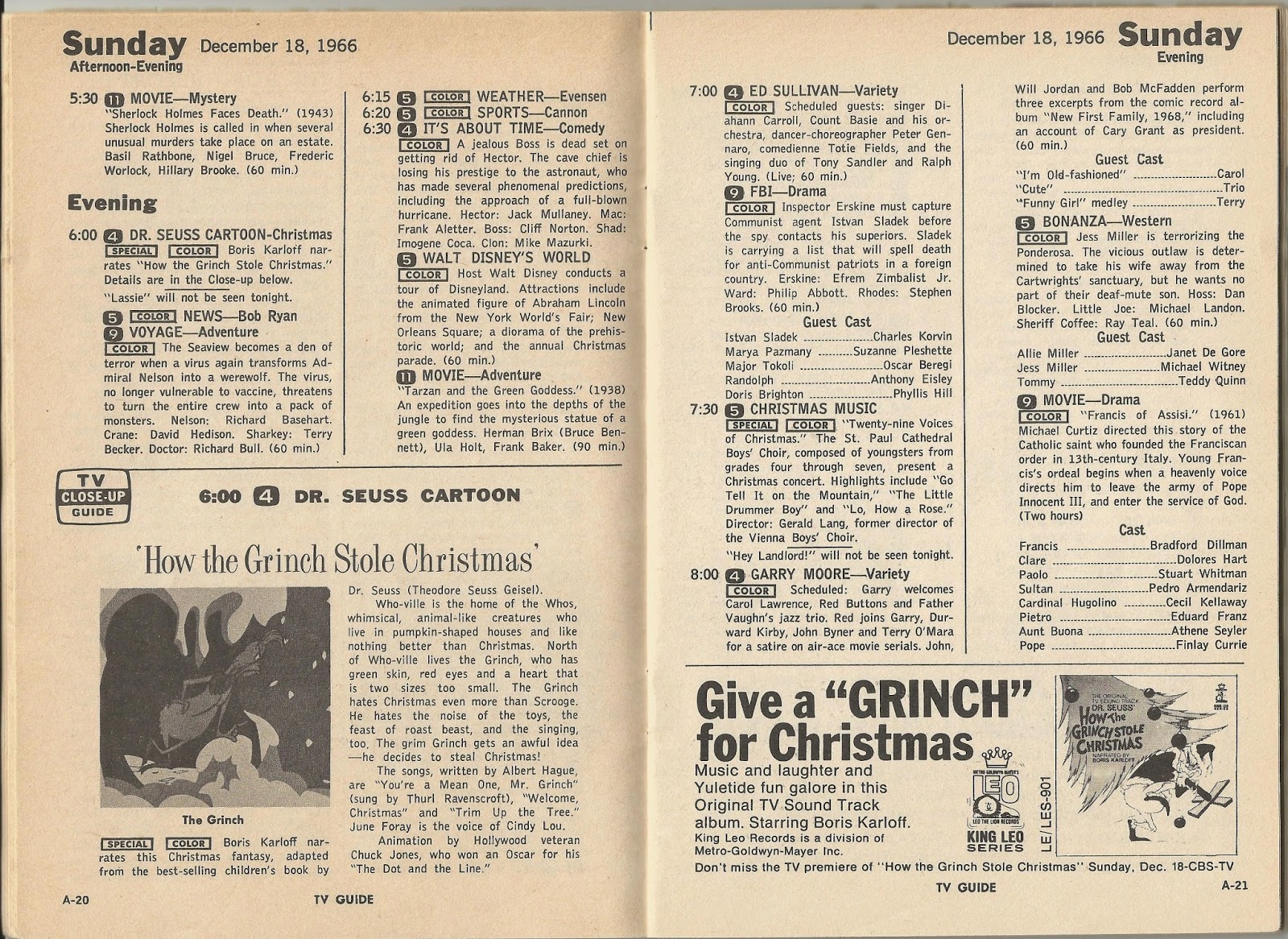 The issue of TV Guide from that week (December 17-23, 1966) featured a "close-up" of the special along with an ad for the soundtrack album in its local programming pages, plus a three-page article about it in the national section, with some interesting insights.

"How the Grinch Stole Christmas" had already been a best-selling children's book, first published in 1957. When Theodor Geisel (Dr. Seuss) teamed up with Chuck Jones, head of MGM's animation department to adapt it for television, a few details had to be worked out. For instance, what color is the Grinch, actually? In the book he was drawn in black and white with red eyes. It looked good on paper, but in the TV special, where things had to be in fuller color, it was decided the Grinch was green.

Also, according to the TV Guide article, "In studying the 'Who's,' whose village the Grinch invades on Christmas Eve, Jones discovered that 'Lady Who's don't have high-heeled shoes--they have high-heeled feet,' and the little girl, Cindy-Lou, 'is not a regular little girl--she has antennas.'"

Production of the special took nearly a year, was made up of more than 25,000 individual drawings, or cells, and according to TV Guide it was at the time "the most expensive half-hour animated cartoon ever created for television." Well-known monster movie actor Boris Karloff narrated the special, virsitle voice actor June Foray ("Rocky the Squirrel" among many others) voiced Cindy Lou, and Thurl Ravenscroft (voice of "Tony the Tiger" of Kellogg's Frosted Flakes fame) sang, "You're a Mean One, Mr. Grinch."

Theodor Geisel was 62 at the time, and although he had been married for 39 years, they had no children. "Kids frighten him," an unnamed friend is quoted in the TV Guide article. The article went on to tell an interesting story about Geisel and his relations with kids. "Once, in Cleveland, autographing his books at a department store, Ted found himself facing a hostile group of children, who finally told him that one of their number could draw better than he could. Geisel invited the boy to join him at the blackboard.

"'By God, he could draw better!' Geisel recalls."

Theodor Geisel died in 1991 at the age of 87. But it was predicted, even back in 1966, that Dr. Seuss would live on. "I predict that Dr. Seuss will emerge as one of the great classics of this era. In 2059, children will hoot for joy when they come across Seuss books," said Rudolph Flesch, author of "Why Johnny Can't Read" in TV Guide. Added Bennet Cerf, head of Random House, which published the Dr. Seuss books, "We have some great names on our list--Faulkner, O'Hara, Capote. But Ted Geisel is the only real genius among them."
Posted by Jeff R. Lonto at 8:47 AM