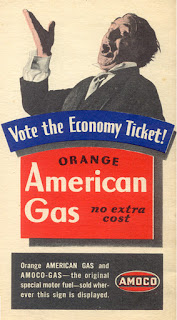 As we embark on a presidential election year that promises to be the most volatile, nastiest and potentially violent of any in recent memory, in a political climate where you express a view somebody else might disagree with at your own risk of life, limb and dignity, it is heartening to find examples of political views just about everyone could agree with, or at least not passionately disagree with. You have to go back in time and look real hard for that.

Turning the clocks back to the early 1930s, things were still pretty volatile in the United States, not to mention the rest of the world. There was a Great Depression going on while dictators stormed through Europe. In the U.S. millions were out of work, companies and banks were going out of business, there was labor strife in the cities and in 1932 voters were ready to run the current occupant of the White House, Herbert Hoover, out on a rail. Franklin D. Roosevelt would end up winning the election that year on the Democratic ticket but the American Oil Company of Maryland (Amoco) ran its own candidate for president, the Hon. I. Save-On-Gas, on the Economy ticket. He looked like a stereotypical gasbag politician too. 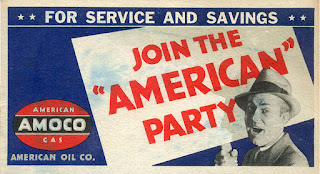 Amoco, then an east coast regional subsidiary of Standard Oil Company of Indiana, used a combination of political humor and patriotism in their advertising during the 1932 and 1936 presidential election years. In 1936 the theme was "Join the American Party," complete with campaign buttons given out by service station dealers, a party that people could get behind regardless of which side of the political aisle they came from. Amoco also distributed booklets, ink blotters and other items full of presidential trivia and history. 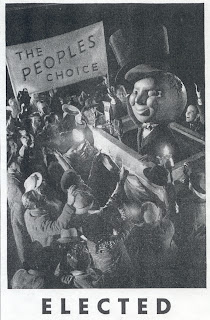 Other marketers also used humorous political campaign themes in their advertising in the 1930s. The H.J. Heinz Company declared the Aristocrat Tomato Man character who appeared in ads for the company's ketchup and tomato juice to be "elected" as "the People's Choice" in a November 1936 advertisement that included a realistic-looking picture of the oversized tomato-headed character with a monocle and top hat at a victory rally, surrounded by enthusiastic crowds and press photographers, with CBS and NBC radio microphones before him.

And in another political campaign themed ad from about the same time, the John F. Trommer Brewing Company of Brooklyn, New York issued a novelty postcard depicting a newspaper with the banner headline: TROMMER'S ELECTED! CARRIES EVERY DISTRICT. 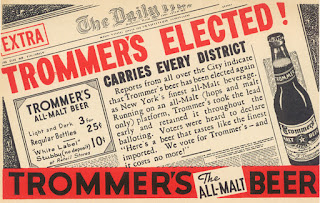 "Reports from all over the City indicate that Trommer's beer has been elected again as New York's finest all-Malt beverage. Running on an all-Malt (hops and malt only) platform, Trommer's took the lead early and retained it throughout the balloting. Voters were heard to declare 'Here's a beer that tastes like the finest imported. We vote for Trommer's -- and it costs no more!'"

I guess we can all drink to that.