Smoking Santa Claus, or: Give the Gift of Cigarettes 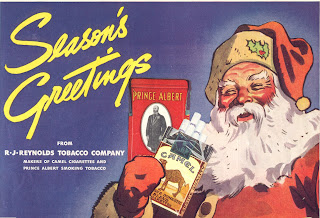 The first time I saw a picture of Santa Claus with a cigarette in hand was in a Mad magazine satire of Christmas commercialism. At 12 years old I thought it was the funniest thing I ever saw. I couldn't stop laughing.

But then, looking at some December issues of old mainstream magazines such as Life, Saturday Evening Post and Collier's, I found all the big cigarette makers at one time utilized Santa to endorse their products in one way or another and suggest that cartons of cigarettes make really swell Christmas gifts.

"There's no more acceptable gift in Santa's whole bag than a carton of Camel Cigarettes," claimed a 1936 advertisement. "Here's the happy solution to your gift problems. Camels are sure to be appreciated. And enjoyed! With mild, fine-tasting Camels, you keep in tune with the cheery spirit of Christmas-tide." The ad goes on to suggest smoking Camels while eating aids digestion, and they give you an "invigorating lift." 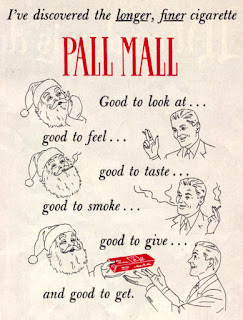 The idea of Santa being a smoker wasn't entirely strange. Up until the 1980s or so Santa Claus was often depicted in everything from Christmas cards to children's books to advertising smoking a pipe. Even the famous poem dating back to 1822 "A Visit From St. Nicholas" ("'Twas the night before Christmas") by Clement Clarke Moore (1779-1863) includes the lines, "The stump of a pipe he held tight in his teeth/And the smoke it encircled his head like a wreath."

Today the depiction of any character, particularly one that appeals to children, as a smoker of any kind would be shocking and horrifying to politically correct adults and traumatic to their overly-protected children. But back in the Analog Age pipe smoking just seemed like a nice, warm thing that friendly grandfatherly types like Santa did, and nobody worried about the bad influence on children or his second-hand smoke causing sickness in them.

Pipe smoking was one thing, but the idea of Santa Claus smoking cigarettes seems hilariously absurd, even to those of us who grew up with his pipe smoking image. And it was only in ads (or parodies of ads), not on Christmas cards or in children's books that he was ever depicted smoking cigarettes. 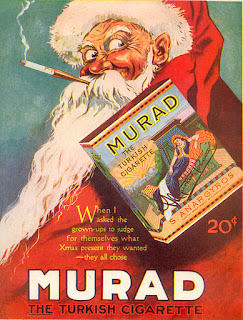 The oldest and most bizarre cigarette ad with Santa I've come across is one from 1919 for a long-gone brand, Murad Turkish Cigarettes. A scary, sinister-looking Santa smokes one through a long holder and claims that the "grown-ups" all wanted Murads for a present. 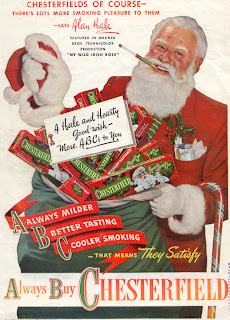 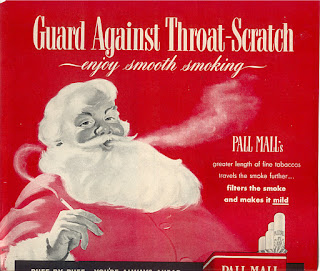 And jolly old Santa himself exhales that smooth, unfiltered smoke from a Pall Mall without bothering with a cigarette holder, guarding against throat-scratch, in a 1950 magazine ad.