A look at some editions of the old Minneapolis Star evening newspaper from the fall of 1964 on microfilm finds a few odd tidbits among the news stories of the Johnson-Goldwater presidential campaign, house fires and car crashes that dominated the pages.

From September 18, 1964, Minneapolis Fire Department officials warned that a homemaking hint published in a magazine distributed by Red Owl food stores to its customers was not such a good idea:

"For added sparkle and a really finished holiday touch, spray the Christmas tree lightly with a fast drying lacquer or your favorite hair spray and then lightly sprinkle on gold or silver glitter." Minneapolis fire marshal Kenneth Welch called that idea "extremely dangerous."

"It's dangerous to spray a tree with lacquer or hair preparations because the vapors given off while spraying are highly flammable. If a person sprayed a good sized tree, there would be a tremendous amount of vapor in the room" which could easily be ignited by the flipping of a light switch, a lit cigarette or flame from a pilot light. The tree would also become more flammable and would burn faster with those chemicals sprayed on it.

A Red Owl Stores official explained that the editorial content of the magazine came from "a homemaking service in Chicago" and that the company was in the process of contacting the editor to see what can be done, such as running a retraction. The magazine was said to have been distributed to some 2,000,000 homes in Red Owl's eight-state marketing area.

Also commenting in the article was Dr. David Tenenbaum, a process research director for Toni Company, a manufacturer of hair spray and other hair products. He concurred that "Hair sprays are not intended for spraying on Christmas trees," adding, "Bourbon will burn if you throw it on a Christmas tree too."

*****
From October 9, 1964, TV-radio columnist Forrest Powers had reported in a previous week's column that British singer and Brian Epstein protege Cilla Black would not be appearing as scheduled on ABC-TV's pop music show Shindig. The item was reported without any editorial comment but an anonymous "teen-age Minneapolis girl" bent on shooting the messenger because she didn't like the message wrote a nasty letter to the incredulous columnist.

"I know we teen-ager's [sic] don't rate much with you old fogies, but I am completely burned up! When I read about Cilla Black not being on 'Shindig' Wednesday night I was so mad I could have blown the roof off.

"I know that you adults think you are pretty big in this world because you are older and have more experience, but believe me teen-agers are important, too, whether you want, or even care, to realize it or not. Cilla happens to be one of my favorite singers and I do not know why she is not appearing on the program, but there had better be a good reason!

"...People are always taking advantage of us because we are young and inexperienced and this is not the first time that I, along with other kids my age, have been disappointed. But I am not going to stand for it any longer. Something had better be done in the future to correct these downright cruel doings to us kids."

Powers responded in his column that "Cilla Black will appear on a future segment of 'Shindig,' the network says, and I hope the news will help the young letter writer feel a little more kindly to 'old fogies.'"

*****
And there was this rather bizarre cartoon ad illustration involving farm animals for Penny's supermarkets (not to be confused with Piggly Wiggly, which also had a cartoon pig mascot). 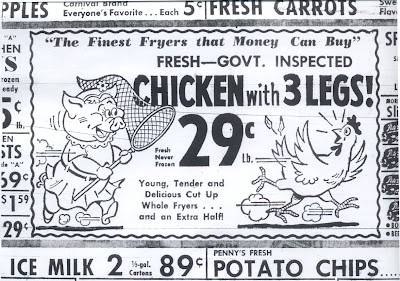 Penny pig runs after a frightened three-legged hen with a net, apparently for butchering so it can be sold as a "delicious cut up whole fryer" (with three legs!) at Penny's supermarket. ﻿Presumably Penny's also had great deals on pork chops.