While it's no longer the case, in the Twentieth Century, 7-Up was a major soft drink brand, for a time the largest-selling non-cola (or Uncola) soft drink. With its crisp carbonated lemon-lime flavor it was a refreshing drink and popular mixer with hard liquor, and its advertising almost rivaled Coca-Cola's in its volume, with ads appearing in major magazines, TV and radio, and on signage outside of diners and ma-and-pa corner stores across the United States and foreign lands. There was also a lot of folklore that surrounded the soda-pop that came in the emerald-green bottles. For instance, there's a story of how 7-Up was able to put out a cooking fire and baste hams at the same time.

The alleged account appeared in the October 2, 1946 issue of the 7-Up Refresher, a newsletter for a group of Midwestern 7 Up bottlers, supposedly recounting a conversation between women in a beauty parlor after a fire truck went by. According to the short piece, one of the women told this story: 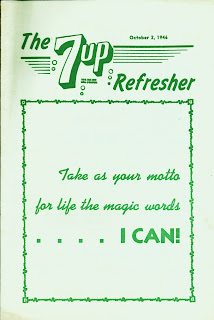 "During the holidays we were cooking several hams on top of the stove. Somehow or other the flame from the gas jet ignited the grease on the ham, and in an instant all the hams were ablaze. Flames were shooting up in an alarming way and we all were running around hysterically. Someone phoned the fire department but it looked as though the whole kitchen would be [on] fire before the firemen came.

"You know, far from doing any damage, the 7-UP improved the flavor of the ham--it's the finest basting we ever had for them. Plain water would have ruined them all and probably wouldn't have put out the fire either. I always have said that one bottle of 7-UP is worth a gallon of water!"

On the same page was this unrelated anecdote:

"Little Johnnie was taking his third grade spelling the other day and was asked to spell the word straight. He spelled out s-t-r-a-i-g-h-t. The teacher pronounced the word as being correct and then asked the meaning of the word.