When Cincinnati pulled the plug on Alice Cooper

When shock rocker Alice Cooper was introduced to television audiences on a late night rock concert show, his outrageous stage presence proved to be way too cool for TV. 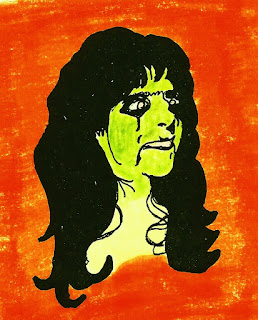 It happened on on November 24, 1972 on the first of a series of ABC late night specials called "In Concert." Alice Cooper was billed as "special guest" in a program that would also include concert performances by Curtis Mayfield, Seals & Crofts and Bo Diddley. Cooper's performance, taped a few weeks earlier at Hofstra University in Hempstead, New York, kicked off the television special. It was far beyond standard TV musical fare, more shocking to the average viewer of the time than the mop-topped Beatles on the Ed Sullivan Show or even the destructive, explosive performance of the Who on the Smothers Brothers Comedy Hour.

The show opened with the roar of highly amplified electric guitars and slamming drums in an arena full of charged-up college students, and a heavily intoxicated Alice Cooper, wearing ghoulish black makeup around his eyes, glitter pants and a cotton shirt that gets torn to shreds by fans grabbing at him as he is escorted to the stage by security officers. He stumbles up on stage, and while swigging from a bottle of Budweiser, grabs a microphone and completely forgets the first verse of his hit song, "I'm Eighteen," singing, "MYYYYYY, my, my, my, my, yeah..." in place of the lyrics. He later sings the chorus and improvises other lyrics for the song. 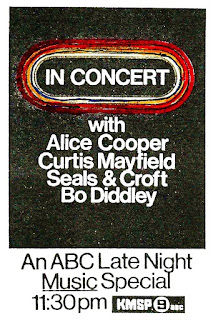 When that highly-charged performance was over, the show broke for commercials, then came back with Alice performing a "West Side Story"-inspired number called "Gutter Cat Vs. the Jets." In this performance, he essentially molests a metal garbage can and pulls out a switch-blade knife on camera.

It was all too much for Lawrence H. Rogers II, owner of the ABC affiliate in Cincinnati at the time, WKRC-TV Channel 12. He was so mortified by what he saw he ordered the engineer on duty at his station to yank the show off the air immediately. But Channel 12's decision to protect and shield its viewers from Alice Cooper's violent theatrics sparked an immediate backlash from Cincinnati rock fans watching the show. They responded within minutes, inundating the station with phoned-in bomb threats. Meanwhile, carloads of youths showed up, picketing the station. Some 4,000 letters of protest, many profane, poured in over the next few days, the biggest mail load that station officials could remember.

WKRC station manager Ro Grignon told TV Guide magazine that he wasn't opposed to rock concerts. "In fact, we think they're going to be a smashing success. We simply found Alice Cooper a little tense."

Meanwhile, the ABC affiliate in Kingsport, Tennessee complained to the network about the performance, but ran it in its entirety nonetheless. WPVI-TV in Philadelphia ran the show on tape delay at 1:30 a.m. Channel 12 in Cincinnati later televised an edited version of the show, sans Alice, to give viewers a chance to enjoy the other, less offensive acts on the bill. The next "In Concert" special was sent to affiliate managers via closed-circuit for approval before broadcast.